Smoky Mountain News Politics Editor - Cory Vaillincourt went over his story "The Return of the Don" about former President Donald Trump. This after Trump spoke at the Republican Party's State Convention, which Cory attended. If Trump runs again or not for president in 2024, Cory says he still is the main leader for the Republican party from what he witnessed. The interview originally aired June 23, 2021.

More To The Story PodcastMore to the Story 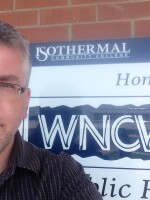 Paul Foster
Paul is a broadcasting and public relations veteran, having worked mostly in radio as well as television, news, marketing and higher education. His radio experience includes writing and reporting news, announcing both music and talk shows, management and sports play-by-play. He fully believe all types of music have the freedom and opportunity to be played and heard. Paul is a native of the region.
See stories by Paul Foster
Give Monthly To WNCW
Sign Up Today!
Top 100 Albums of 2021
See the complete list of Top 100 albums of 2021, as voted on by our listeners and programmers.
SEE THE RESULTS
20/21 Airs Tuesday evenings
Hosted by Kevin Washington, this show explores musical connections between the 20th century and the 21st.
Read more