Welcome to our new website! Pardon our post-construction "dust" as we clean up, restore and update content.
More News 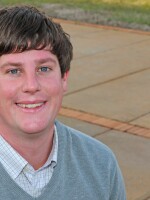 Spencer Jones
When Spencer Jones was in college he sent WNCW staff members an email hoping to get a chance to work at the station. He titled the message “Brother can you spare a job?” That was in 2004. He was not offered a job, but Spencer Jones was, and still is, a persistent person. He kept trying. One day he ran into WNCW Music Director Martin Anderson in Saluda, North Carolina and made another attempt to catch a ride on the WNCW train. Anderson sent him to Joe Kendrick, Program Director at WNCW. Kendrick told Jones to make a demo tape. He did, it was well received and a dream came true for the fearless Mr. Jones; he became a music host at WNCW. He admitted that it was terrifying at first, but he soon felt comfortable in his new position. In 2013 he became a part time underwriting sales rep for the station and began working throughout the WNCW coverage area. He cherished his position so much he applied for it when the job became full time and successfully fulfilled his wish to become a bona fide, full-time staff member.
See stories by Spencer Jones
Give Monthly To WNCW
Sign Up Today!
Top 100 Albums of 2020
See the complete list of Top 100 albums of 2020, as voted on by our listeners and programmers.
SEE THE RESULTS
20/21 Airs Tuesday evenings
Hosted by Kevin Washington, this show explores musical connections between the 20th century and the 21st.
Read more