This Sunday on Dubatomic Particles: A Tribute to Lee "Scratch" Perry

"Without music you all are dead; with music you are alive. There is nothing music can't do." Rainford Hugh Perry (20 March 1936 - 29 August 2021) was one of the most influential music producers of all time. His pioneering use of studio effects and dub techniques have influenced every genre of music and his impact on the evolution and advancement of reggae music is unparalleled. Join WNCW this Sunday night at 10pm for a special edition of Dubatomic Particles where we pay tribute to the life and works of the late reggae music icon; The Jamaican E.T., The Madman, The Upsetter himself Mr. Lee "Scratch" Perry. 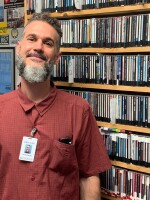 Justin Devito
Host of Dubatomic Particles - Venturing from foundation to 21st Century Reggae and Dub with your record-collecting selector, and occasional guest hosts, every Sunday from 10pm until Midnight.
See stories by Justin Devito
Give Monthly To WNCW
Sign Up Today!
Top 100 Albums of 2021
See the complete list of Top 100 albums of 2021, as voted on by our listeners and programmers.
SEE THE RESULTS
20/21 Airs Tuesday evenings
Hosted by Kevin Washington, this show explores musical connections between the 20th century and the 21st.
Read more